What Is Cardiac Resynchronization Therapy? 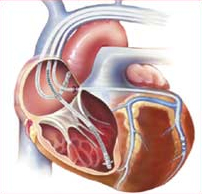 Cardiac resynchronization relies on electric leads to correct an arrhythmia commonly diagnosed in patients experiencing heart failure. The leads electrically stimulate heart muscle to synchronized the contractions of the heart’s two lower chambers, or ventricles. Only when the lower chambers beat in harmony can they contract with enough force to push blood carrying oxygen through the body.

Until recently, lifestyle changes, medication and, sometimes, heart surgery were the only treatment options. Patients with severe symptoms, however, received little, if any, relief from such approaches. To make matters worse, up to 40 percent of patients with CHF also have an arrhythmia that further reduces the heart’s ability to beat properly.

Cardiac resynchronization therapy (CRT) is an innovative new therapy that can relieve CHF symptoms by improving the coordination of the heart’s contractions.CRT builds on the technology used in pacemakers and implantable cardioverter devices. CRT devices also can protect the patient from slow and fast heart rhythms.

Overview Of A Heart Beat

The heart is comprised of four chambers: two upper atria, and two lower ventricles. An electrical system controls the synchronized pumping action of these chambers.

The bundle branches separate to the left and right ventricles, which enables the electrical signal to stimulate both ventricles simultaneously. This coordinated contraction, or squeezing, of the ventricles is necessary for optimal pumping of blood to the body and lungs.

Damaged heart muscle can become so weak that it can no longer pump effectively, leading to cardiomyopathy and CHF.

Coronary artery disease and heart attacks are the most frequent causes of CHF, but inherited disorders, viral infections and toxins, such as alcohol, also can cause heart muscle damage. Symptoms of CHF typically include shortness of breath, swelling of the feet and legs, abdominal swelling, fatigue, exercise intolerance, diminished appetite and depression.

Most often, medications aim to control CHF symptoms, such as the build up of excess fluid that causes leg swelling and makes it difficult to breath. Medications can reduce fluid retention, strengthen the heart’s squeezing ability and relax blood vessels, thereby reducing the resistance to blood flow and easing the heart’s workload.

In addition, lifestyle changes, such as low-salt diets and exercise, can help control symptoms.

When there is a delay in electrical signal transmission through the left bundle branch, this causes left bundle branch block (LBBB). Because the electrical signal to the left ventricle is delayed, the right ventricle begins to contract a fraction of a second before the left ventricle, instead of simultaneously. The result is an asynchronous, or uncoordinated contraction of the ventricles and a mis-timing in the contraction pattern of the left atrium and ventricle. Other conduction abnormalities, such as right bundle branch block (RBBB), also may contribute to less efficient contraction of the heart. This further reduces the pumping ability of the already weakened heart muscle.

The concept behind CRT is quite simple. Resynchronization restores the normal coordinated pumping action of the ventricles by overcoming the delay in electrical conduction caused by bundle branch block. This is accomplished by means of a special type of cardiac device.

These powerful, “built-in” devices have enormous potential to improve the quality of life and probably survival for patients with heart failure.

Pacemakers are typically used to prevent symptoms due to an excessively slow heartbeat. The pacemaker continuously monitors the heartbeat and, when necessary, delivers tiny, imperceptible electrical signals to stimulate the heartbeat. Most pacemakers have two electrode wires, or leads, one in the right atrium and one in the right ventricle. This ensures the pacemaker will maintain the normal coordinated pumping relationship between the upper and lower chambers of the heart.

The wires that carry the electrical signals connect to an electrical pulse generator placed under the skin in the upper chest. In addition to the two leads (right atrium and right ventricle) used by a common pacemaker, the CRT device has a third lead that is positioned in a vein on the surface of the left ventricle.

This allows the CRT device to simultaneously stimulate the left and right ventricles and restore a coordinated, or “synchronous,” squeezing pattern. This is sometimes referred to as “bi-ventricular pacing” because both ventricles are electrically stimulated (paced) at the same time. This reduces the electrical delay and results in a more coordinated and effective heart beat.

When Is CRT The Right Choice?

The ideal candidate for a CRT device is someone with:

Some CRT candidates also have a high risk of Sudden Cardiac Death. For these patients, a special CRT device can stop potentially life-threatening rapid heartbeats by delivering an electrical shock known as defibrillation. This device incorporates a standard implantable cardioverter defibrillator (ICD) with a CRT pacemaker creating a “CRTD” device. (The “D” refers to defibrillation.)

The response to CRT can vary greatly among patients. Clinical studies involving more than 2000 patients worldwide demonstrate modest improvements in exercise tolerance, CHF severity, and quality of life in most patients. Improvement may happen quickly, but sometimes it can take several months.